We don’t know a lot about Izard Chapel because we have to go back a long time to find its origin. « Pan » and « Sylvain », Greek and Roman gods were honoured there; which is not surprising as one of them was the shepherds and herds god, while the other was the woods and fields god.

It is in 1638 that it becomes the place for an important pilgrimage, which still happens nowadays. Every year 300 to 400 people bring some devotion to the chapel.

However, a cult and religious place always has some mystery, and Notre dame des neiges has got itself talked about quite a lot; are all those stories that we hear myths or realities? 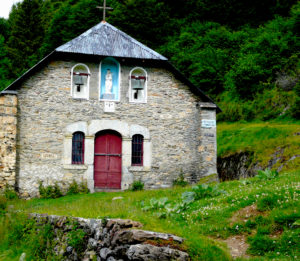 In 1941 the dam at the Etang d’Araing is finaly completed, as well as its galeries, tanks and water supply points. This work gave many jobs to the villagers. By considerable installations for that time, the water collected at Urets joins the Etang d’Araing. A great aerial pressure pipe carries the water 1040 metres down to the power plant at Eylie, by putting a presure of 104 kg/cm² on the turbine wheels. The factory produces 50 millions kW/h. 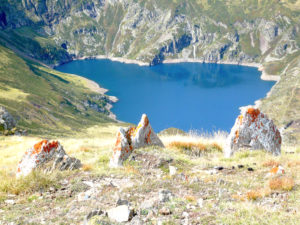 In 1853 the Biros valley becomes a mining region. Lead and zinc are exploited in the form of galena and blende. 500 people work there in 1907; the valley is then thriving and overpopulated. They need two schools for the 200 pupils in Sentein. Women take care of the fiels while almost all men work at the mine. Bentaillou started as a british mine and is handed over to a french society in 1913. In 1926 the zinc exchange rate drops, provoking a gigantic strike. The extraction stops and the mine shuts down. Luckily at that time the construction site of the Araing dam needs labour force, so many workers find jobs there until 1942. That year the mine reopens by the Pyrenees Mining Union (UMP); miners get their jobs back. The mine is definitively shut 14 years later and means the end of mining activity in the Biros, as two attempts to reopen it in 1963 and 1973 ended in failure… 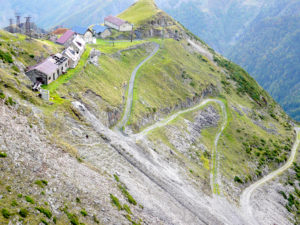 The peak of Bulard, 2754 m, reveals to the East one of the most impressive face of the region. A remarkable lead and zinc vein located between 2400 and 2550 m drove men to exploit that slope in the early century. After building two canteens, dorms and forges at the bottom of a rocky spur, a 60 metres aerial path was carved in the cliffs to dig galeries. A wire served as handrail to more than 150 miners each year. The extraction was made on six levels; the ore was carried away first by the « Decauville » system (rail and trolleys), then by cables and wagons to Eylie. Between 1901 and 1919 more than 80 000 tons of mine-run were torn off the mountain. Working at the Bulard mine, famous in the Pyrenees, was the best pay but also the most dangerous. The ungratefulness of the mine was not enough, they needed to add the ungratefulness of the mountain! 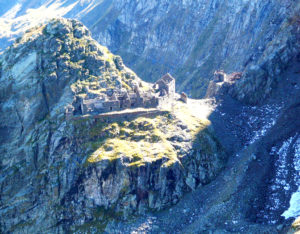 Ruins of the Bulard mines

The Decauville carrier in the Orle valley

Even though it is located in Spain, the Fourcail mines’ ore was extracted by french men and carried to the village in Orle. The inventor of the trainrail at small dimension, Paul Decauville, had difficulties to cross the Biroussane mountain. The villagers in the well-populated valley at that time wanted to keep their land and threw more spanners in Decauville’s work than the mountain did. But he found the possibility to dray a straight outline above the steep slope, which enabled him to install his railway line. The field problems were resolved by digging eight tunnels, from which six still exist today. The originality of this system was to have the ability of being dismantled; this way they took apart the parts of the railway in avalanche zones before each winter, to shield them in galeries drilled for that purpose. Each spring they reinstalled the railway and the ore could be carried by wagons, pulled by mules.

One of the tunnels on the Decauville track